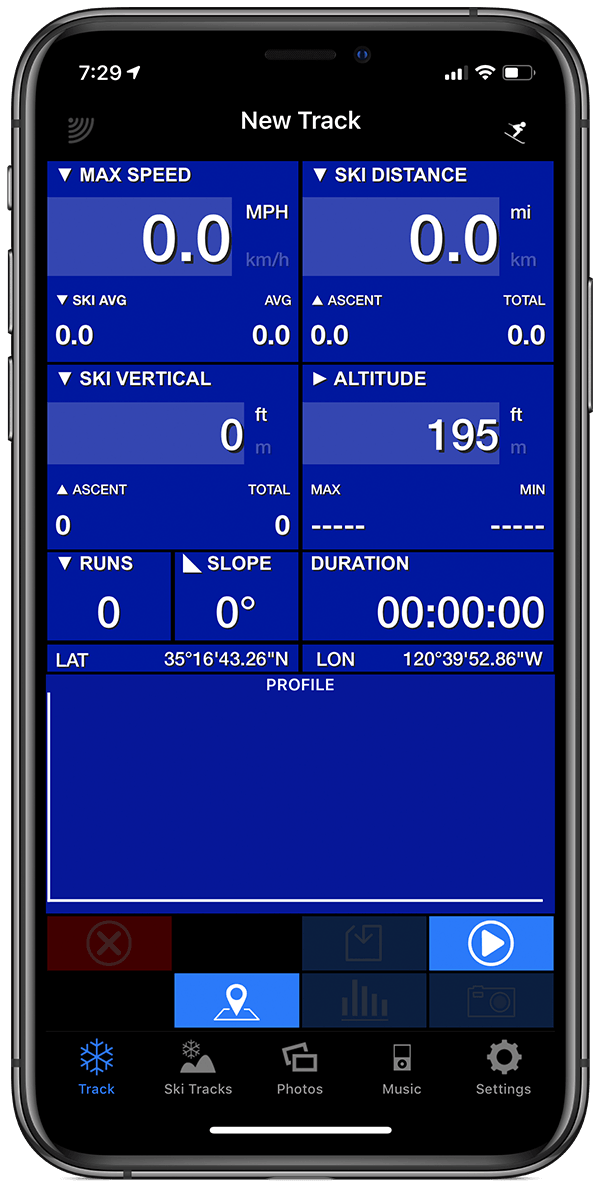 Powder pairs simple mobile tracking with smart insights to help athletes of all levels get more from each pow day.

Adventure and Exploration, Conservation and Sustainability

Powder began as a redesign of the iOS app Ski Tracks. As a skier myself, I was stoked the moment I saw the brief. Incorporating real user feedback and insights from other apps into a more modern, accessible winter sports tracker was just what Ski Tracks needed.

Powder takes the best parts of Ski Tracks and folds them into a new app, designed from the ground up to make winter sports tracking faster, easier, and more insightful, both on and off the mountain.

The original Ski Tracks app, while useful, shows only a dense wall of numbers before and while logging a workout

What do we want Ski Tracks to be?

I began the research for Powder by scouring the web for complaints, reviews, and general feedback from Ski Tracks’ existing users. After comparing their notes and needs with those from users of similar sports apps, I outlined four representative athletes to shape Powder’s design moving forward.

Some, like Ali, are just starting out, and want a little more insight into how she’s doing and where she needs to improve. Others, like David, want the ability to track distance-based winter sports like cross-country skiing, which most ski apps today don’t make a priority. 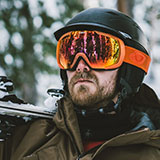 Gavin’s a very experienced alpine skier. He wants detailed stats for each run, plus the ability to share and compare his stats with his buddies. 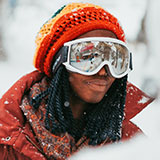 Ali’s just starting out; she wants to be a better rider, but needs guidance in how to improve since she’s not quite sure what to fix. 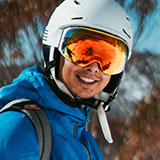 Denny’s a snowboarder who’s at his local resort with his family. He’s all about convenience—whatever app he uses needs to be automatic. 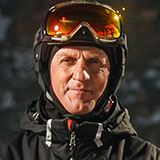 David’s a nordic and alpine skier who skis both at resorts and in the backcountry. He needs an app that tracks distance too, not just runs.

As I noted briefly above, Powder’s research began with digging through reviews for Ski Tracks across the US and UK App Stores, as well as recommendations and reviews from sites like SKI Magazine and the New York Times. I’ve included a few representative reviews below to get a sense of what folks found when using Ski Tracks.

From there, I created an Experience Journey map based solely on the reviews of the athletes that seemed to be having a middle-of-the-road experience, excluding those who loved the app, as well as those who were so frustrated they wouldn’t be likely to give it another chance.

What are our athletes saying about the app?

In the US App Store, Ski Tracks has nearly 400 ratings, with an average rating of 4.3 out of 5 stars. The vast majority of users gave it four or five stars; however, a significant number also complained about its lack of guidance, their frustration in working with their data, and Ski Tracks’ shortcomings when compared to similar apps for tracking other sports, like Strava.

Good app but live tracking of friends would be good

“This app hasn’t really been improved since its inception. With most resorts offering good 4G coverage it would be good to be able to live track friends, view others ski tracks data (similar to Strava) and have daily leaderboards of most distance covered or fastest top speed”

“I have had this app for 3 years now, it’s a good solid app and very reliable. That being said this app could do a whole lot more. Like total up your yearly data, show the number of lifts/runs you have done, Etc. Since using the Ikon app it’s opened my eyes to more. Also add a feature you can add comments to above the day (specific).”

Cool at first but frustrating later

“It’s a really great app when you first use it and are all excited about it but eventually you reach a point where every time you use it you forget to turn it off and the data becomes totally useless. This isn’t even difficult to implement, just recalculate the key metrics like speed and ski distance after I set the bad runs to ski lift activity.”

“I’ve been using this app for about three seasons now, and it has always impressed me with its accuracy and features. Even now, in the off season, I can look back through each trip and remember all the great (or not so great) times I’ve had over the last couple of years. It struck me that it was probably time to review this app as I sat in the middle of the off season thinking about a skiing app. 11/10 would recommend.”

“The app is not intuitive. First time I used it… it didn’t record anything and the third time I accidentally deleted all my data from the day of skiing 😡”

How do they feel when using the app?

While experienced users seem able to get the hang of Ski Tracks after a few uses, learning how it works for first-time users is difficult due to lack of guidance. Plus, its reliance on a wall of numbers creates an experience that is overwhelming while skiing. However, Ski Tracks’ run history and post-workout analysis of the data it logs are some of its best-loved features.

Tap the image to expand the entire Experience Map

What do other sports trackers do well?

After rating each app in three different categories, their ratings were averaged to give an overall score. Slopes came out on top, followed by the other two apps designed specifically for tracking winter sports. Apple’s solution, however, was the easiest to use, and Endomondo’s ability to record distance-based sports like nordic skiing is something the skiing-only apps lacked.

Tap the image to expand the entire Feature Matrix

At the top of the list of athlete priorities was an app that was inclusive of various skill levels and types of winter sports. It also needed to be helpful, with detailed stats, automatic tracking, and easy, accessible controls for both resort and backcountry use.

To make your stats more actionable after you get off the mountain, Powder offers insights based on each day’s performance, like where you pushed yourself and where you might’ve been taking it too easy.

After several rounds of high-fidelity prototyping, Powder’s final user interface—complete with a set of custom icons—was ready to roll. It builds on the best parts of Ski Tracks, like run tracking and detailed stats, and adds new features like Explore, Coach, and one-tap access to emergency services. Whether you ride or stride, Powder makes your days safer, smarter, and a whole lot more fun.

One experience across all of your devices

Log your ski days with your iPhone, Apple Watch, or both—Powder’s tracking and exploration features work with whatever device you already have with you. 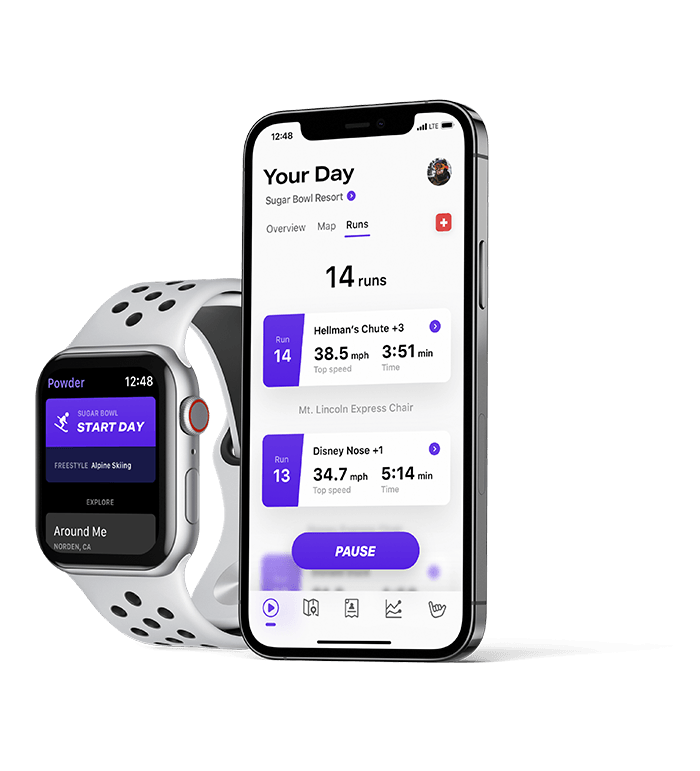 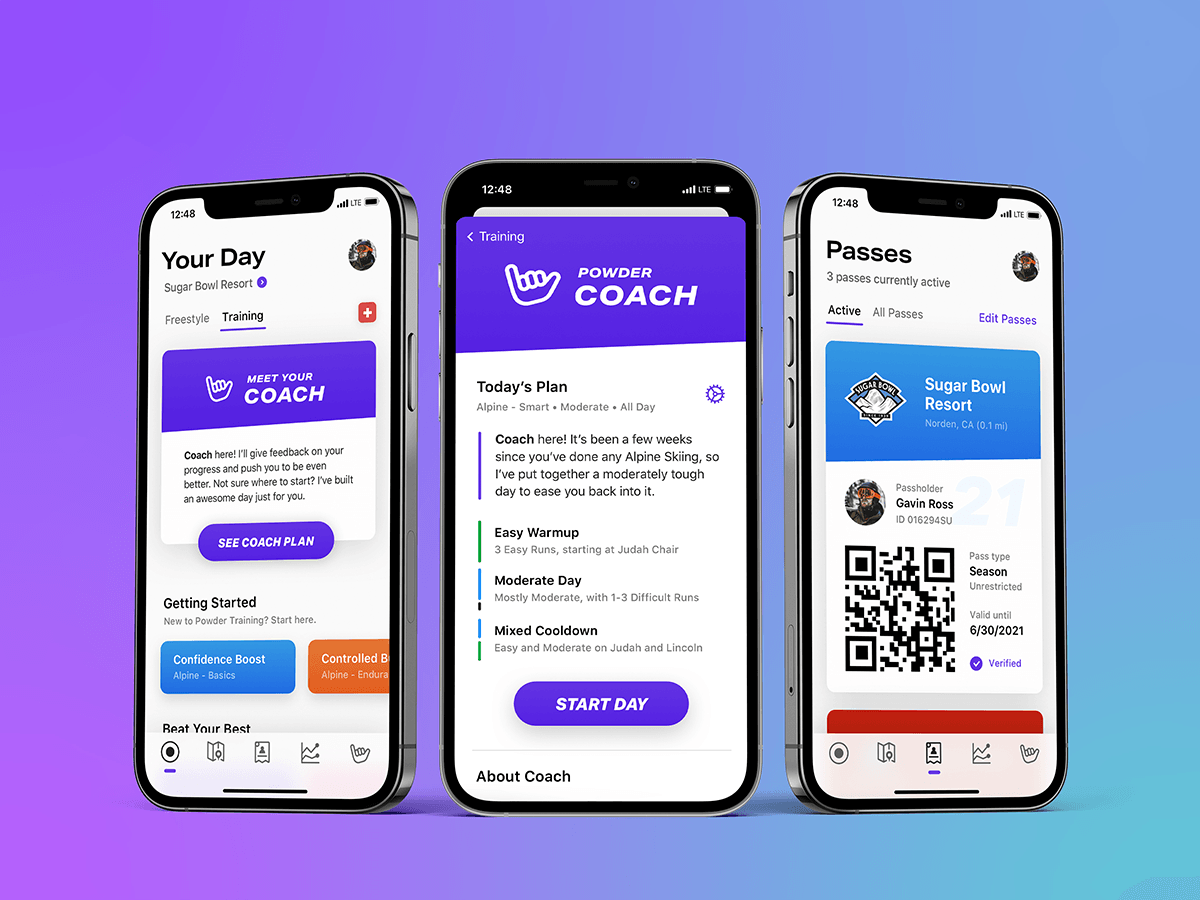 Learn the basics or race against the clock

With training plans focused on going the distance, racing your best time, or simply learning the basics, Powder’s got your back, whether you’re a newbie or a pro.

Powder’s Coach provides smart feedback and tips for improvement for each sport you track—and some well-deserved cheerleading when you hit a personal best.

Keep all of your passes a tap away

Once you’ve verified your account with Powder, you can add your daily, weekly, and season passes from supported resorts and access them all with a tap. 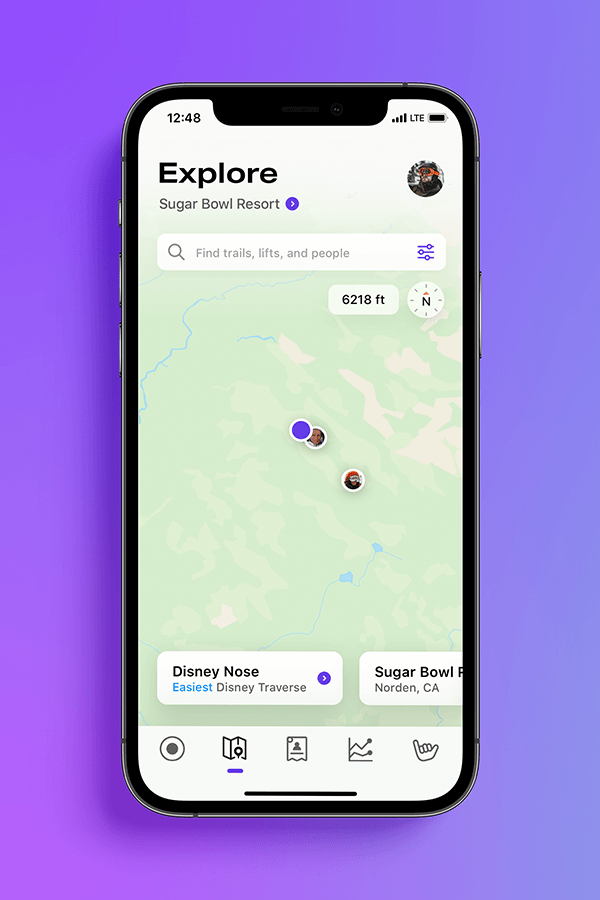 Discover and explore nearby resorts, trails, lifts, and public lands

Keep tabs on conditions and explore nearby people, trails, resorts, and more—just ask. And if you’re lost or injured, Powder keeps everything you need in one place.

Track all your miles (or kilometers) whether you walk, ride, or stride

Powder supports over twenty different sports—including cross-country skiing and snowshoeing—and is designed to work just as well for distance-based athletes.

Connect to emergency services like 911 and Ski Patrol on any device, anywhere in the app. And with Lifeline, Powder can automatically send your location and an SOS message to your contacts too. 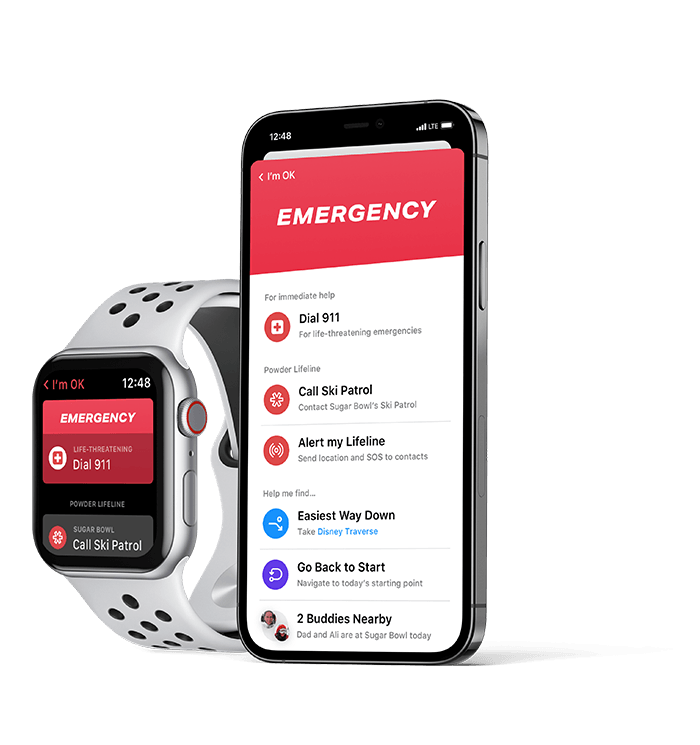